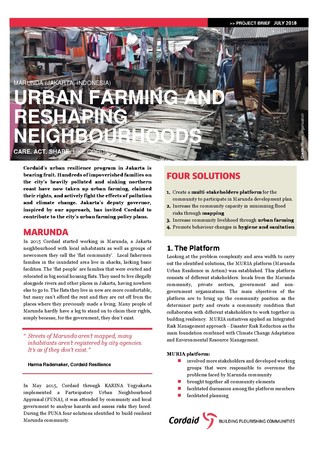 Cordaid’s urban resilience program in Jakarta is bearing fruit. Hundreds of impoverished families on the city’s heavily polluted and sinking northern coast have now taken up urban farming, claimed their rights, and actively fight the effects of pollution and climate change. Jakarta’s deputy governor, inspired by our approach, has invited Cordaid to contribute to the city’s urban farming policy plans.

In 2015 Cordaid started working in Marunda, a Jakarta neighbourhood with local inhabitants as well as groups of newcomers they call the ‘flat community’. Local fishermen families in the inundated area live in shacks, lacking basic facilities. The ‘flat people’ are families that were evicted and relocated in big social housing flats. They used to live illegally alongside rivers and other places in Jakarta, having nowhere else to go to. The flats they live in now are more comfortable, but many can’t afford the rent and they are cut off from the places where they previously made a living. Many people of Marunda hardly have a leg to stand on to claim their rights, simply because, for the government, they don’t exist.
“ Streets of Marunda aren’t mapped, many inhabitants aren’t registered by city agencies. It’s as if they don’t exist.”
Harma Rademaker, Cordaid Resilience
In May 2015, Cordaid through KARINA Yogyakarta implemented a Participatory Urban Neighbourhood Appraisal (PUNA), it was attended by community and local government to analyse hazards and assess risks they faced. During the PUNA four solutions identified to build resilient Marunda community.