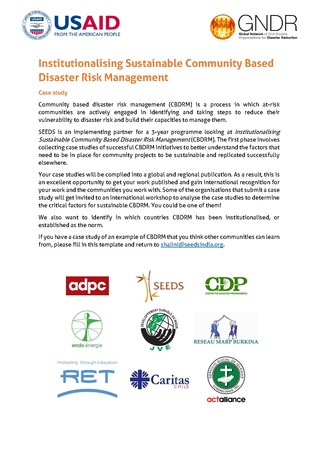 Case studyon the Cyclone Phailin. The case study was selected among other best practices in community-based disaster risk reduction in Asia and was awarded by the Asian Disaster Preparedness Centre (ADPC).

The PfR project in India began with the goal of building the livelihood resilience of communities from 2011-2015.
The PfR programme in India was implemented by Wetlands International South Asia and partner organisation NetCoast. The Mahanadi Delta, located on the eastern coast of the Indian sub-continent is climatologically prone to tropical cyclones with their resultant storm surge and coastal inundation, between the months of April to May and October to November every year. The rivers flowing through the region are heavily laden with silt which reduces their holding capacity and results in recurrent floods. The CBDRM activities took place in the state because of the aforementioned vulnerability and specifically because Super cyclone Kalinga which resulted in the death of 10,000 people. CBDRM activities mostly covered disaster preparedness, creating village level disaster risk reduction committees and building their capacities to assess local risks and vulnerabilities raising awareness on risk reduction and disaster preparedness and response measures. Panchayati Raj Institutes National and state disaster authorities and specific government line departments were involved in the process. The project ended in 2015 and was funded primarily by Cordaid.